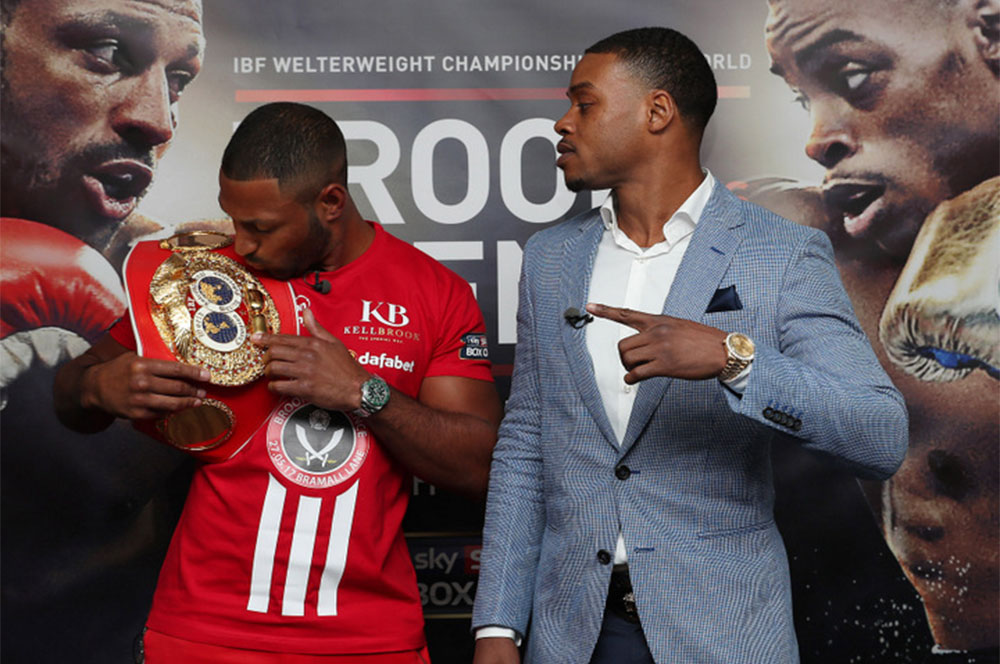 It’s not Errol Spence’s intention to try and blast out IBF welterweight champion Kell “Special K” Brook (36-1, 25 KOs) earlier than middleweight champion Gennady “GGG” Golovkin did in beating him by a 5th round knockout on September 10 last year, but he still wants to get him out of there in a better fashion. Brook and Spence will be fighting on May 27 at Bramall Lane in Sheffield, England.

The fight will be taking place in front of Brook’s own British boxing fans. As such, Spence, 27, will be going into the large 32,000 seat Bramall Lane looking to upset the fan’s hero Brook, and march out of there with his IBF 147lb title in his possession.

Spence (21-0, 18 KOs) notes that Golovkin got hit some by Brook in the process of pressing him out in the 5th round. Spence doesn’t want to take the shots that Golovkin did, because he says he wants to go home to his daughter afterwards and take her to the beach. If you look at the Golovkin-Brook fight, Golovkin didn’t get hit that much. He got hit with one good shot in round 2, but most of the other punches that Brook threw were getting blocked on the gloves of GGG. Brook landed one good uppercut in round 2 that caused Golovkin to cover up. Brook then flurried on him but didn’t land one punch during the flurry. Everything was blocked. The crowd cheered loudly for Brook, but he didn’t land anything during that brief burst of shots. The stick that Golovkin took from the boxing fans for his performance against Brook was a little unfair. He didn’t do bad at all against him, but it was a no win situation due to him fighting a welterweight. It didn’t matter what Golovkin did, he was always going to be criticized afterwards by boxing fans.

“I don’t want to get caught up in that,” said Spence to Dontae’s Boxing Nation about him not wanting to outdo Gennady Golovkin’s 5th round knockout performance against Brook. “You can always go out of character and end up doing something different. I’m not going to go in there and try and get him out there early. I’m just going to go with the flow and do what I do best, break him down and hopefully get him out of there early a little better,” said Spence.

There’s no real reason for Spence to try and outdo what Triple G did in stopping Brook. Golovkin seemed to be in a hurry to knock him out for some reason. I don’t think Spence needs to try to rush the knockout of Brook. I do think it’s imperative that Spence does knock Brook out inside the distance, because the scoring for the fight might be WAY out of whack from what’s actually transpiring inside the ring. Who can forget the oddball scoring by the 3 judges that worked the Golovkin-Brook fight last September in London, England? Golovkin dominated 4 of the 5 rounds, and yet one judge had Brook winning 3 rounds to 1. The other two judges had it knotted up 2-2 after 4 rounds.

I would have loved to have seen how this trio of judges had the 5th round scored up until the point where Brook’s corner threw in the towel. It would have been completely laughable if the judges had Brook even winning the 5th round until the fight was stopped by his trainer Dominic Ingle. Spence needs to make sure that the fight does no go to the scorecards in order not to find himself potentially on the receiving end of a decision loss to Brook. Sheffield is Brook’s home city, so there’s going to be total cheering for him from start to finish.