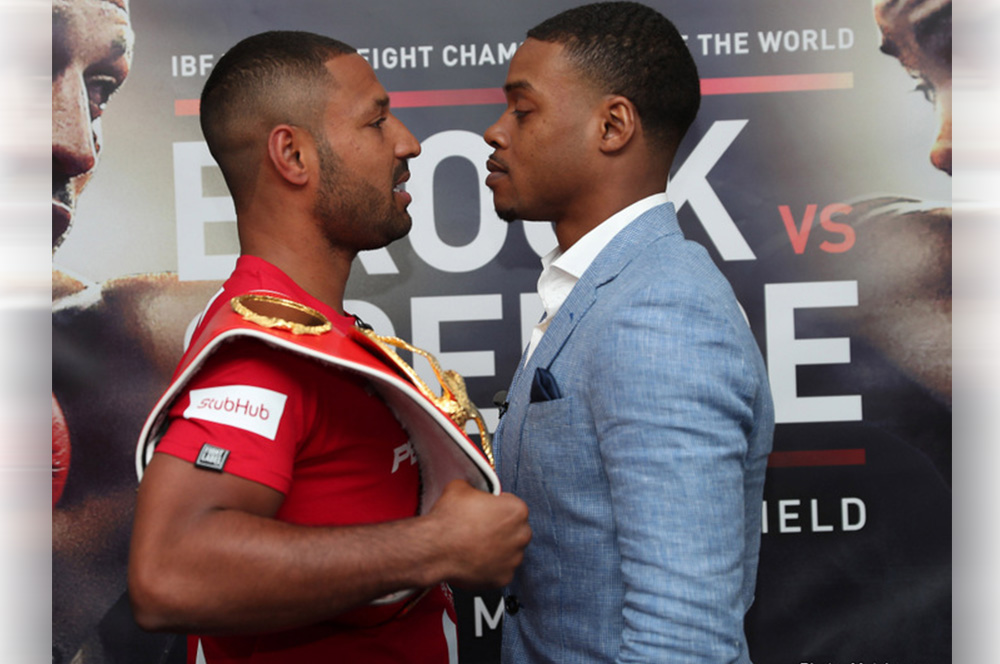 Errol “The Truth” Spence Jr. (21-0, 18 KOs) does not care one bit that he’s going to be fighting in front of a huge 30,000 supporters of IBF welterweight champion Kell “Special K” Brook (36-1, 25 KOs) in their fight next month on May 27 at Bramall Lane, in Sheffield, England. Spence says Brook’s boxing fans will not be able to help him inside the ring on the night.

Brook will have to try and handle the talented Spence all by his lonesome, and it could be awfully hard for the 30-year-old Brook to do that. Brook has fought only one good welterweight in his career in Shawn Porter in 2014, and he had to hold him all night long to survive.

“There’s a lot of things I need to work on like keeping my hands up, staying sharp, using the jab, 1-2ing, keeping the same pace from the 1st round to the last round. The talking is over with,” said Spence to skysports.com about his fight with Kell Brook. “It’s time to weigh-in. It’s time to fight. I don’t care if the fight is in his backyard. The fans can’t help him. It’s going to be a war in there,” said Spence.

Brook doesn’t go to war with his opponents. Despite having a lot of knockouts on his resume, Kell has shown zero ability or interest in going to war when facing good opposition. He’s fought 2 good opponents during his entire career in Gennady Golovkin and Porter. Brook didn’t go to war with either of those 2 talented fighters. Brook held Porter frequently in using the punch and grab technique on him.

Against Golovkin, Brook moved around the ring, and would launch periodic assaults on the Kazakhstan fighter. We don’t know how well Brook would have done in that because he wouldn’t stand and fight Golovkin long enough to see if he could hurt him. Brook always got back on his bike after landing a few shots. It was not interesting to watch because it looked to me like Brook wasn’t serious about trying to win the fight. He was just trying to look every once in a while, and then running the rest of the time.

So there it is. Brook’s fans won’t be inside the ring with him on May 27 to help him when he gets inside the ring in Sheffield, England at Bramall Lane. It’s going to be awfully tough for Brook in this fight. Spence likely will be better prepared, considering that he has WBC junior middleweight champion Jermell Charlo as one of his sparring mates.

Charlo, 5’11”, is bigger than Brook and likely stronger than him as well. For Spence to be using Charlo as a sparring partner says a lot about him. He’s basically sparring with a middleweight to get ready for the Brook fight. Charlo is big enough to compete at the middleweight division if he wanted to. I’d really like to know who Brook is going to be sparring with for his training camp. I imagine it’s one of his trainer Dominic Ingle’s fighters.

Ingle doesn’t have anyone that is even close to being as talented as Jermell Charlo. As such, there’s going to be a big imbalance in the preparation between Brook and Spence. That’s bad news for Brook, because he’s already up against it in fighting the future star of the welterweight division in Spence. He’s like a super nova with the way he shines inside the ring. Floyd Mayweather Jr. has pegged Spence as the next star at 147, and there aren’t too many boxing fans that are disagreeing with him.

Brook is counting on the fans to get him over the Spence hurdle to bring him to victory in this fight, but it doesn’t look like the 2012 U.S Olympian plans on going along with that. Hopefully for Brook’s sake he brings a good game plan to use in case the fans cant’ psych Spence out by scaring him with their cheers. Let’s be serious; Spence is a major talent who won’t be worried about the pro-Brook fans at Bramall Lane.

Spence has fought all over the world as an amateur, and he’s not going to be too worried about fighting in front of a large group of hostile fans. Besides, the fans are mostly going to be cheering the action. If Brook lands something, the fans will go mad like they did when he fought Gennady Golovkin last September. The cheering from the fans didn’t get Brook past Golovkin, and I don’t think they’ll get him past Spence either.

As long Spence realizes that Brook is probably not going to be going to war with him on May 27, he might be OK. Spence has got to plan on a strategy to defeat Brook’s holding attempts if he chooses to use that as his primary game plan like he did against Shawn Porter. Spence has to find a way to fight Brook with him holding onto him. The other thing that Brook will almost surely be going in the fight is to run a great deal.

We saw Brook’s movement against Golovkin, as well as Shawn Porter. Since those are the only 2 quality opponents on Brook’s resume, it’s safe to say that he’s going to go back to that tired old plan.

So in a nutshell, Brook will very likely use one or more of the following strategies to beat Spence:

Since Brook rarely does a lot of jabbing, I have to rule that out as an option for him against Spence. Slugging it out is another plan that I don’t see Brook choosing to use against Spence, because it would put him in danger. Brook will likely try to punch with Spence in the first round, but once he gets hit in the bread basket by one of his hard body shots, it’ll change everything. I see Brook getting on his bike and not slugging with him after that.