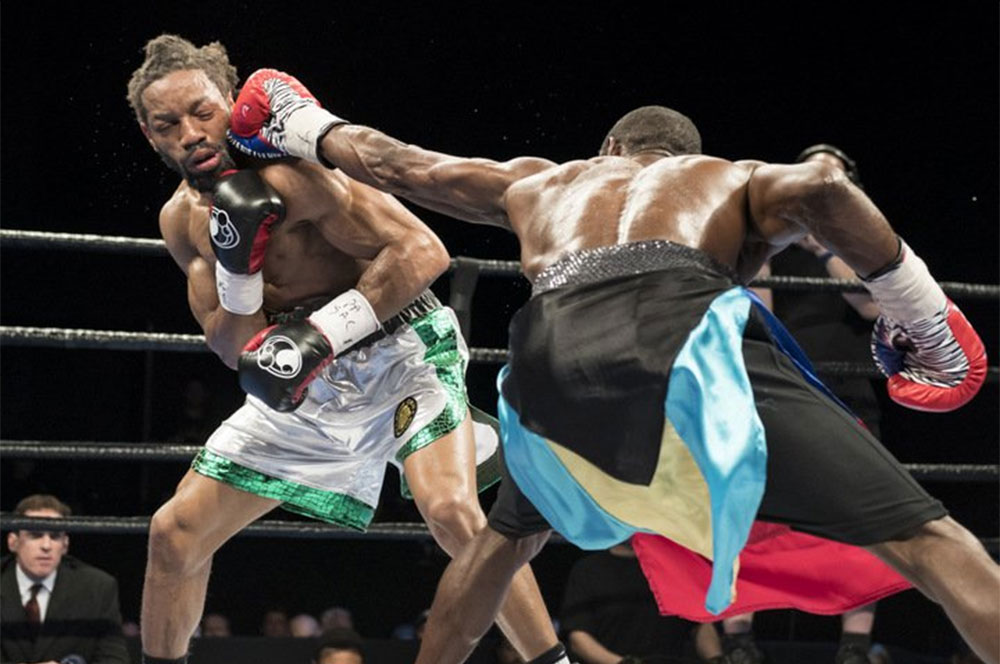 The judges scored the fight 98-92, 96-94 and 96-94. Boxing News 24 scored the fight 98-92 for Douglas. The final seconds of round 12 saw both fighters stand and flurry on each other with big shots. Cherry definitely got the better of the action with his superior hand speed. He landed a number of hard punches to the head of Douglas, but the shots did nothing to him. Douglas was able to handle Cherry’s power without any problems.

Cherry, 34, should be happy he got the decision tonight, because he did not fight well at all following the 2nd round, Douglas got the better of Cherry with his left hook and precise punching from rounds 3 through 10.

Cherry came out quickly in rounds 1 and 2, hitting Douglas with hard right hands to the head and body. Cherry looked really good in the first couple of rounds. One reason for that was because Douglas was too patient, and he wasn’t showing the kind of urgency that he needed to in the first 2 rounds. This is the same thing that we saw from Douglas in his 10 round unanimous decision loss to Javier Fortuna on November 12 last year. Douglas was too patient, and he let Fortuna outwork him in that fight. Like tonight’s fight, it was a match that could have gone in favor of Douglas. He just wasn’t aggressive enough for the full three minutes of each round.

“I didn’t lose that fight. Period,” said Douglas. “The fight went how I expected it would in the ring. I’ve always been a fan of his. I feel like I fight great competition and I was able to out box him with my jab. He tried to bait me in and I showed I was the better boxer.”

Douglas started to take over the fight in round 3. He landed some hard left hands to the head of Cherry that got his attention. Cherry kept fighting hard in the round despite taking some big punches. It was just that he wasn’t landing with the same kind of power.

In round 4, Douglas did a lot of moving around the ring. He was stopping every once in a while to land a big shot, but the movement might have caused the judges to score the round for Cherry. Douglas landed the far better shots in the round. Cherry wasn’t able to get much power on his shots. Cherry landed some body shots while Douglas was moving, but the punches weren’t hard enough to give him the round.

Going into round 5, the fight appeared to be knotted up 2 rounds a piece. Edner Cherry came out showing a lot more urgency at the start of the round in attacking Douglas in a fierce manner to try and win the round. However, by the midpoint of the round, Cherry had slowed down the pace of his attacks, and was fighting largely at the same slow speed that Douglas was fighting at. We often see that from fighters. They fight to the same pace of their opposition. The good fighters are able to set the tempo for their fights. Cherry made the mistake in round 5 of slowing down the pace of his attacks based on the slow pace that Douglas was fighting at. Douglas had a late surge in the round. At the end of the round, Cherry hit Douglas after the bell. Douglas took the shot without any problems, but it looked pretty blatant.

Cherry started round 6 fighting at a very fast speed. He going after Douglas, and not seemingly caring about his own defense. Douglas took advantage of this to nail Cherry with some really hurt punches. At the end of the round, Douglas tagged Cherry with a powerful left hook to the head that caused him to stagger backwards two steps.

In the 7th round, Douglas continued to control the fight with his powerful left hook and beautiful right hands to the head. At the end of the round, Douglas hit Cherry after the bell. It’s unclear whether the two fighters hitting each other after the bell at times tonight was intentional or just a coincidence.

Cherry hit Douglas after the bell at the end of round 8. This was another round in which Douglas appeared to get the better of the action with his powerful shots. At the beginning of the round, Cherry and Douglas fought in a toe-to-toe manner with both guys nailing each other. It was great action. Douglas’ powerful left hook appeared to be the difference.

In round 9, Cherry controlled most of the round with his right hand shots to the head. However, in the last 15 seconds, Douglas came alive and landed some monstrous shots to the head of Cherry. It was impressive to see how.

In the 10th round, Cherry flipped the script in moving around the ring in stalling out the round. Cherry appeared to realize that he had a substantial lead and could afford to waste the final round by not fighting hard. To Cherry’s credit, he stood and traded power shots with Douglas in the waning seconds of the round and got the better of the action. Douglas still did the better work through most of the round.

All in all, it wasn’t a great performance from Cherry. The way he fought tonight, I wouldn’t give him any chance of beating the top fighters at lightweight like Mikey Garcia, Robert Easter Jr., Jorge Linares or Terry Flanagan. Those fighters are all on another level than Cherry in my opinion. Douglas would give Linares problems with his punching power. I don’t think he could handle the power or Easter Jr. or Mikey Garcia though.