Jacobs: Golovkin will be tested for sure

Jacobs: Golovkin will be tested for sure

Jacobs: Golovkin will be tested for sure
Boxing 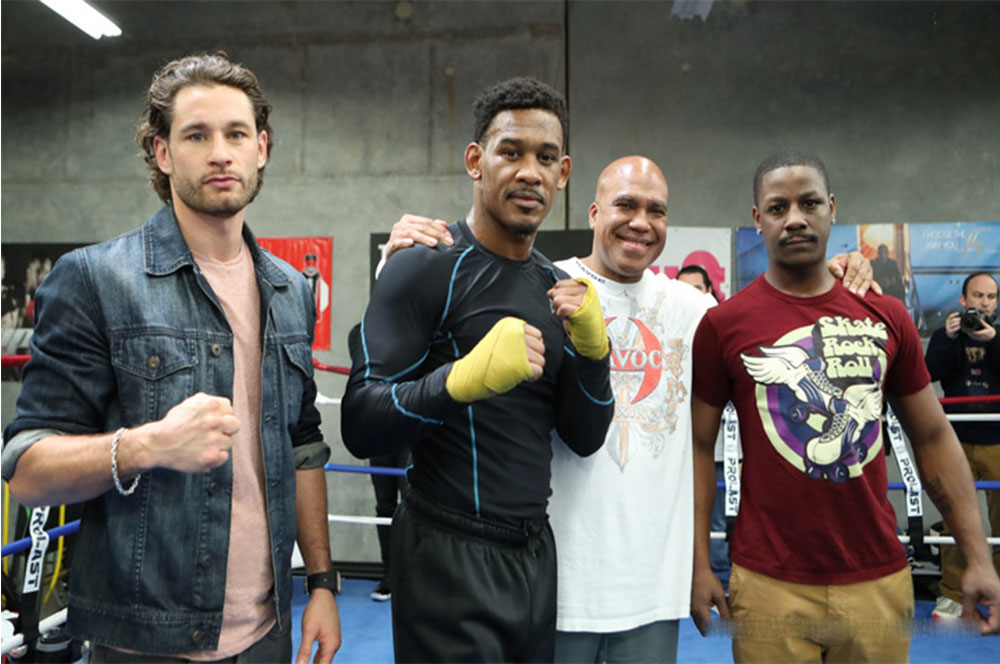 Jacobs says he may not hit quite as hard as Golovkin, but he hits hard enough to hurt his opponent. The 6’0” Jacobs (32-1, 29 KOs) is very aware of his height, reach and weight advantage and he is going to be looking to use that against the 5’10 ½” Golovkin. Jacobs is 1 ½ inches taller than Golovkin, but he has a 3” inch reach advantage.

Golovkin-Jacobs fight take place in three and a half weeks from now on March 18 on HBO PPV at Madison Square Garden in New York. The venue favors Jacobs too, as he’s from Brooklyn. It’s interesting that Golovkin was willing to fight in Jacobs’ hometown.

A lot of champions wouldn’t ever agree to that. They would force the fight to take place in a venue that was beneficial to them. Golovkin has a lot of boxing fans in the New York area, so it’s not going to be a big negative for him to fight in Jacobs’ hometown.

Golovkin recently had the experience of fighting his last opponent Kell Brook in his home country of the UK in front of his fans. Golovkin was able to shutout the noise and focus on taking Brook out, which he did by a 5th round TKO. Fighting at home only works if a fighter is willing to stand and trade. That’s what Golovkin is obviously hoping Jacobs will do, because he’s going to be looking to KO him with every punch.

Jacobs says he knows what to expect from Golovkin in terms of his punching power, and he believes that’s going to help him take his shots better than if he didn;t know what his power is like. However, Jacobs was knocked out in the past by Dmitri Pirog in 2010, and he had to have some kind of idea what his power was like before that fight.

“First I heard it was Billy Joe Saunders, and now they’re talking about Canelo,” said Jacobs to Fighthype.com about Golovkin’s next fight after his March 18th match. “They can plan for whatever they want to plan for. They can even fight after March 18th, but he’s going to have a loss come March 18. If they still want to plan those things, I’ll be front row watching him fight, but I know I’ll have the belts with me,” said Jacobs.

There’s been talk that Golovkin will fight WBO middleweight champion Billy Joe Saunders in July if he beats Jacobs. It’s still not confirmed whether Golovkin will take that fight or not. It would be cutting it very close if Golovkin were to fight Saunders in July, because his promoter Tom Loeffler is working on a deal with Golden Boy Promotions for a fight between Golovkin and Saul “Canelo” Alvarez in September. That fight is still very much up in the air right now. But if Golovkin faces Saunders in July, it would be a risky match-up to take for him. If Golovkin suffers and injury in that fight, then he can forget about facing Canelo in September. The fight wouldn’t happen under those circumstances.

“I just want to let my hands go the talking for me on March 18,” said Jacobs to Fighthub.com. “I won’t disclose everything they’ve [Andre Ward] told me, but it’s a mental thing. Sometimes you have to experience things you never experienced before. I think he [Golovkin] hasn’t fought anyone like me. Every fight you can see bit and pieces of flaws. You can see his ups and his downs and what he’s good at and what he’s not. But ultimately when I compare those guys with me, there’s no comparison. When I go in there, it’s going to be a completely different fight because I’m not those guys. In my opinion, I’m the best opponents he’s fought, and I think people would agree to that as well. He’s fought some guys a little bit past their primes or somewhat smaller than he was. He has never fought anyone like me inside the ring as a professional, and I’m looking forward to capitalizing on that. Any advantage I can have, I’m banking on it. This is boxing. Any physical, mental, any kind of gain that you can have, you’re going to take it, and I think my physical is a big advantage as well. He’s a strong guy. You can try and criticize that. ‘He’s a bigger puncher than you or maybe he’s stronger than you.’ But whether he’s an A-plus puncher and I’m a B-plus puncher, I can still hurt you and I can still have a physical size advantage. Whatever works for me? I’m looking forward to putting together a master plan and being successful,” said Jacobs.

It’s true that Golovkin hasn’t fought anyone like Jacobs before during his pro career. It’s also true that Jacobs hasn’t fought anyone like Golovkin. Jacobs can’t forget that he’s facing someone really different than anyone he’s faced before. Golovkin doesn’t fight like Pirog or his sparring partners that are preparing him for the fight. Jacobs says that he’s got guys with a similar fighting style as Golovkin. They can fight like Golovkin, but they’re not going to be like him when it comes to the punching power and overall talent.

“I really believe in myself,” said Jacobs. “I don’t say anything. I let my hands go the talking and walking inside the ring. When you go against a big puncher too and you know what to expect, you kind of prepare mentally for that. As opposed to being in there and getting caught and not really knowing the power of the other guy and I would be a surprise. When you know it, you kind of embrace it a little bit more. I’m not going to give away the game plan, but I do believe there is some respect that has to be gained, and I believe I will get that. He’s going to be tested one way or another for sure,” said Jacobs.

I don’t know that you can prepare for the kind of power that Golovkin has. Jacobs can brace for the shots, but if he gets hit with a lot of clean shots from Golovkin, I don’t think it matters how prepared for his power he is. Jacobs needs to try and not get hit in this fight as much as possible. That’s the true key to victory for him. If Jacobs can limit Golovkin’s punch output, then he’ll have a chance of winning the fight.

Jacobs’ size advantage could help him if he’s able to stay on the outside and Jacobs Golovkin all night long. Golovkin is pretty good at cutting the distance to his opponents. You’d have to expect that he’ll be able to get past the jab of Jacobs to land some of his big head and body shots in the fight. Jacobs isn’t a very good inside fighter like Golovkin. If the fight takes place on the inside, then it will probably end quickly on March 18 with Golovkin scoring a knockout. Jacobs needs to try and tie Golovkin up when he gets near to him. He also needs to use a lot of moving and jabbing.

Jacobs didn’t want to say what advice IBF/WBA/WBO light heavyweight champion Andre Ward is given him to defeat Golovkin. It wouldn’t be surprising if Ward has told him to tie Golovkin up and wrestle him for 12 rounds like Ward did against Sergey Kovalev in their fight on November 19 last year.