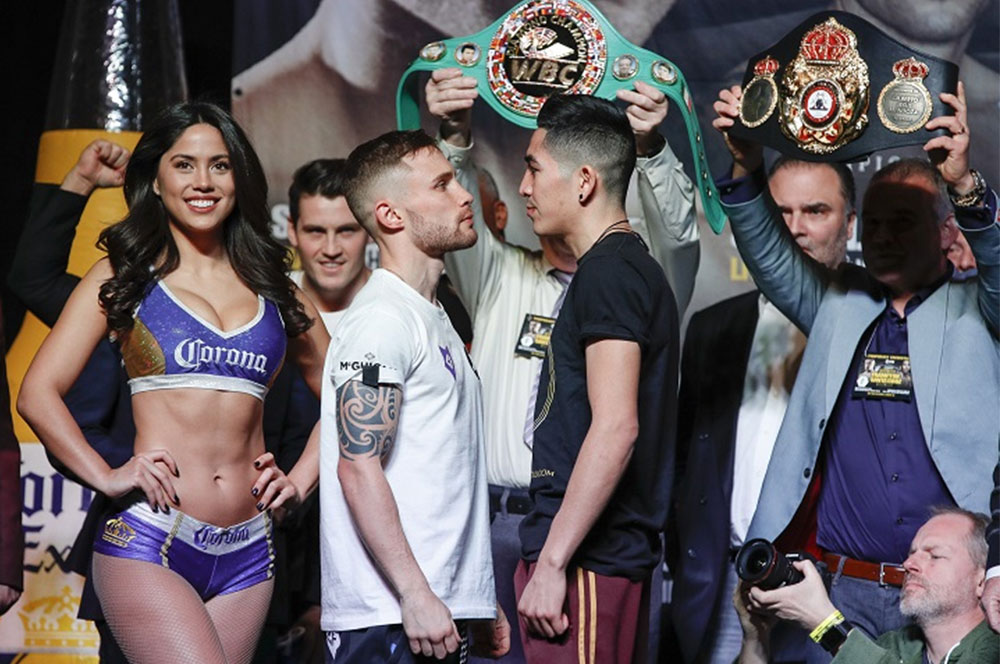 WBA Super World featherweight champion Carl Frampton (23-0, 14 KOs) was on target with his weight on Friday in coming in at 125 pounds for his rematch against #2 WBA Leo Santa Cruz (32-1-1, 18 KOs) this Saturday night at the MGM Grand in Las Vegas, Nevada. Santa Cruz also weighed in at 125lbs.

They looked on friendly terms during the face off with each other after weighing in. There were no attempts at intimidation by either guy.

Santa Cruz likes to fight at a very fast pace in his contests, and he’s likely going to be continuing that style on Saturday. Santa Cruz found out that Frampton wasn’t able to fight at a fast pace for a prolonged period the last time they fought each other. Where Santa Cruz made a mistake is waiting too long before he started to attack Frampton.

By waiting until the 5th, Santa Cruz let Frampton build up a wide enough lead for him to win the fight. It didn’t matter that Santa Cruz appeared to win most of the last seven rounds.

The judges still thought Frampton had done enough to win. The scores of two of the judges were very odd given the close nature of the fight. One judge had the fight 117-111 for Frampton, and another scored it 116-112. The score that seemed to best indicate what happened in the fight was the 114-114 by the third judge.

“We’re going to be smarter, but as a Mexican fighter, I’m going to give the fans a great fight,” said Santa Cruz. “Every time I step into the ring, I’m trying to please the fans. I can use my distance and box if I wanted to, but I want to brawl.”

Santa Cruz might want to consider brawling in this fight, because it’s the only thing that worked for him last July. When Santa Cruz was on the outside, Frampton was able to shoot forward and land a shot or two and then get back to the outside to safety. It was Frampton’s hand speed and quick feet that allowed him to be able to dominate while staying on the outside. Frampton wasn’t able to match the arm length of Santa Cruz, but he was able to get in punching range quickly by moving forward faster than Santa Cruz could handle it.

Frampton has said recently that he’s made new adjustments to his fighting style for the rematch against Santa Cruz, which could mean a number of things. Frampton had problems with the pressure and more specifically the inside fighting skills of the younger Santa Cruz last time they fought. If Frampton has improved his game, then it must mean he’s going to do a better job of fighting on the inside without tiring in the last seven rounds like he did last year. However, it’s not probable that Frampton will be able to improve in that area.

It’s more likely that Frampton will use more movement this time to prevent Santa Cruz from fighting him on the inside. When he does fight in close, Frampton will possibly tie Santa Cruz up in clinches and then have the referee break them apart each time to give him separation. Frampton needs space for him to be able to beat Santa Cruz.

This is a fight that a lot of boxing fans are looking forward to. Frampton, 29, beat Santa Cruz by a very close 12 round last July in front of a fan-friendly pro-Frampton crowd at the Barclays Center in Brooklyn, New York. Santa Cruz put himself at a disadvantage by agreeing to fight in New York, because it was clear the moment the fight was made that the crowd would be mostly Frampton’s fans.

The fight was controlled by Frampton in the first five rounds, and then it was taken over by Santa Cruz in the last seven rounds. To many fans, they felt Santa Cruz had done enough to deserve the win. He didn’t get it, and all we can hope for is the judges score this Saturday’s fight fairly without them being influenced by crowd noise for one of the fighters.

WBC World lightweight champion Dejan Zlaticanin (22-0, 15 KOs) weighed in at 134.5 pounds for his maiden title defense against former two division world champion Mikey Garcia (35-0, 29 KOs). Garcia weighed in at 134.5lbs. When the two fighters stood for a face off, I had expected the 5’7” Garcia to be much taller than the 5’4” Zlaticanin, but they looked almost identical in size.

“I would really love the opportunity to fight the winner,” Garcia said to skysports.com. “They have a rematch coming up and the first fight was a great one, and if I can get the winner and claim supremacy of the division, that would be amazing.”

“He’s a very good, aggressive fighter with dangerous power,” Garcia said to espn.com about Zlaticanin. “He’s always coming in looking for the knockout, looking for big shots, trying to land his big overhand left [and] right hand to the body. Just, he’s very good at what he does.”

Zlaticanin is a hard hitting southpaw. He’s capable of pulling off an upset on Saturday night if he lands something big enough.