Brook frustrated that he may need to fight Spence

Brook frustrated that he may need to fight Spence

Brook frustrated that he may need to fight Spence
Boxing 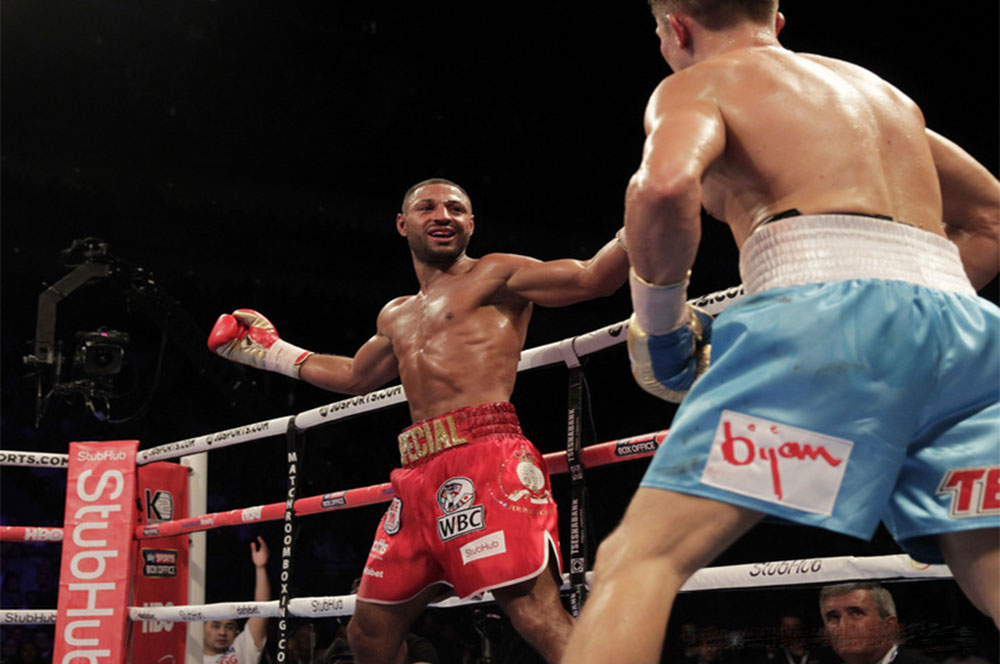 IBF welterweight champion Kell Brook is bellyaching that he can’t get a big fight against one of the top stars in the 147lb division, and that he may need to defend his title next against his mandatory challenger Errol Spence Jr. or else be forced to give up his IBF title by the International Boxing Federation.

Brook doesn’t understand why he can get a big money fight against Amir Khan, Danny Garcia, Manny Pacquiao or Keith Thurman. The problem that Brook has is pretty clear. Those guys are all busy or have other plans. The fights happen rarely, and there’s a lot of waiting involved with them. Look at Garcia and Thurman.

It’s taken this long in each of their careers for them finally to get a big fight against each other, and it’s not even a PPV fight. Khan has only been in one big fight in his entire career and that was against Saul Canelo Alvarez. Brook had his first big fight last September against Gennady Golovkin, and he was blown out in five rounds.

Brook doesn’t understand why he can’t get another big fight back to back. That’s not how it goes in boxing. You get a big fight rarely, and usually after you WIN, not after your trainer Dominic Ingle throws in the towel to save you in round 5 like he did with Brook. You can argue that Brook is fortunate that he’s still the IBF welterweight champion, because he didn’t lose his title by going up in weight to fight Golovkin at middleweight.

Brook said this to ESPN.com about him not being motivated for a fight against Spence:

“I know I have a mandatory with Errol Spence,” said Brook. “He’s a very talented fighter but not really heard of in the UK or even America but we all know he can fight. It’s hard to get up for guys like this because he doesn’t have the name yet. I want the big money fights if I’m going to make 147 pounds.”

Brook needs to realize that he’ll gain more popularity by facing and beating Spence than any other empty win that he has on his resume. Brook has never beaten anyone that you can call a good fighter except for Shawn Porter, and you can’t call that a win for him. Brook held Porter nonstop all night long and arguably should have been disqualified for the holding in my opinion.

I think Porter deserved the win. Once you take that win out of the equation for Brook, you’re left with wins over guys like Carson Jones, Vyacshslav Sencehnko, Alvaro Robles, Kevin Bizier and Frankie Gavin. Brook wasn’t complaining all those years that he was facing those type of fighters. I would say that Spence is a HUGE upgrade over anyone that Brook could ever hope to fight in the 147lb division. Put it this way, Brook was be happy someday that he fought Spence, because he can say that he fought that guy before he became a star.

Spence on his way to superstardom, and Brook is merely someone standing in his way about to be run over.

Well, it’s too bad that Brook can’t get motivated for a fight against Spence, because he was plenty motivated in the past when he was defending his IBF title against the likes of Frankie Gavin, Kevin Bizier and Jo Jo Dan. What has changed from when Brook was defending against those mediocre fighters as the IBF champion and now having to defend against Spence? There’s a responsibility that ALL champion has in them having to defend their titles against mandatory challengers.

That’s part of the role of being a champion. Champions don’t just get to pick and choose who they want to fight all the time. If that were the case, I imagine we’d see many of the champions taking the easiest of opponents so that they could milk their titles for years and years for easy paydays. As a champion, there’s no getting around facing the mandatory challengers. If Brook wants to keep his IBF title, he’ll accept the responsibility of him being a champion and face Spence. If not, then Brook will give up his IBF title.

I get the impression that Brook now only wants to keep his IBF title so that he can fight who he wants to. He’s already done that with him fighting Gavin and moving up to middleweight to fight Golovkin. Now the IBF is telling Brook that he’s got to fight a top guy from the IBF’s rankings, and he doesn’t seem happy about it. If Brook isn’t happy about it, then he needs to vacate his IBF title and get out of the way so that a non-complainer can take the title and do what all champions do and defend the thing instead of picking and choosing who he wants to fight against. Brook wasn’t bellyaching when the IBF ordered him to fight Jo Jo Dan and Bizier. Why is he complaining that he has to fight Spence?

“I’m a big name in world boxing now. Everyone knows who I am now,” said Brook. ”I’ve been in with Golovkin and I did what no other middleweights have done to him and I’ve never lost at welterweight,” said Brook.

Brook isn’t a big name in the welterweight division. Who’s he kidding? He’s merely the guy that Golovkin beat up. Brook can from him for four rounds, and then was saved by his trainer in the 5th when he could no longer run. If becoming famous means getting stopped by Golovkin, then I guess there’s a whole bunch of famous guys in the sport. I hate to rain on Brook’s parade, but he’s not famous from losing to Golovkin.

Come on, Brook only fought well in the 2nd of that fight. He was almost knocked out in round 1, and dropped in round 3. I think the referee blew the call. That was a knockdown Golovkin should have been credited with when he nailed Brook with a left hook to the head at the start of the round. Brook fell down like a bowling pin from that shot. They called it a slip, but Brook was effectively done for the night after that knockdown. That was at the very start of the 3rd round. It was full scale retreat for Brook from that point on. So basically, Brook fought well in round 2, and was in the retreat move round 3 until the bitter end in round 5. I don’t see where Brook came out ahead, because he fought poorly in rounds 1, 3, 4 & 5. If that wasn’t bad enough, Brook appeared to quit in round 5. If you look at the fight in slow motion, you see Brook getting hit with a body shot in the round and then going into the shutdown mode for the remainder of the fight until his corner was forced to throw into the towel. Brook stopped throwing punches after he got hit with a body shot. The fight had to be stopped by his corner in order to save him from being clinically knocked out in the traditional fashion by getting flattened. Believe me, Brook would have been knocked out if his corner had thrown in the towel, because he was no longer throwing punches, and he was getting nailed left and right by big shots from Golovkin.

The only middleweight that really gave Golovkin problems during his career was Kassim Ouma. That fight took place years ago in 2011. Ouma fought Golovkin in a war, and he paid a heavy price in fighting him that way. Golovkin stopped Ouma in round 10. It’s a good thing the referee stopped the fight, because Ouma was getting really plastered by Golovkin in the last two rounds of the fight. Heck, Ouma was getting nailed with monstrous shots all throughout the fight. I can’t believe how much punishment Ouma was able to take. But he landed a lot of heavy shots himself, and bruised up Golovkin’s face badly. If you compare the Golovkin-Ouma fight to the Golovkin-Brook fight, there’s no comparison which fighter did the better job against Golovkin. Ouma actually stood and fought Golovkin, and didn’t run from him the way Brook did.

“I just had a massive, great fight with Golovkin and I exposed him to a certain degree,” said Brook. ”I lifted him off his feet in that fight. I got caught with a perfect shot in the eye and broke my eye socket and couldn’t see out of my right eye. Now I want another massive fight.”

First off, Brook didn’t life Golovkin off his feet. I think Brook is talking about an uppercut that he hit Golovkin with in round 2. Like most of Brook’s punches, it was an arm punch, and it wasn’t a shot that lifted Golovkin off his feet. It did nothing. All it did was get Golovkin motivated to attack. You notice right after Brook landed the shot, he ran away rather than staying in the pocket. If you the shot lifted Golovkin off his feet, then why didn’t Brook stick around to finish him off? The reason why is because Golovkin wasn’t hurt, and started to tear into Brook, and he wanted no part of that, so he ran away. Golovkin wasn’t exposed by Brook. Getting hit a few times doesn’t mean you’re exposed if you end up winning the fight by a 5th round knockout. Getting exposed means you lost the fight. The last time I checked, Brook’s trainer threw in the towel in round 5 when Brook stopped fighting. Brook basically quit for whatever reason. You can say that Brook quit because of his eye injury, but the basic fact is he quit. He wasn’t throwing punches. He had quit in the final sequence of the fight.

If Brook fights Spence and gets knocked into oblivion by him, then his dreams of big fights against Pacquiao, Khan, Thurman and Garcia go out the window.