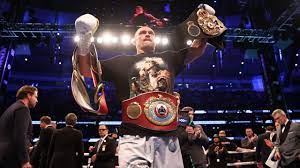 It would be a nightmare for Joshua to enter the lion’s den to fight Usyk in front of his own fans in Kyiv in the rematch. If Joshua’s self-confidence is shot to pieces from last Saturday’s defeat, he’s going to be a shaken nervous wreck fighting Usyk in Kyiv, Ukraine.

As the new three-belt champion Usyk SHOULD have some say in where the second fight with Joshua (24-1, 22 KOs) will be taking place.

Joshua’s promoter Eddie Hearn said he doesn’t like the idea of the rematch taking place in Ukraine in February, had he says he’s thinking of staging it in the UK again. It’s unclear whether the location of the rematch has already been written into the rematch clause.

If so, there’s not much Usyk will be able to do about getting his way in bringing the rematch to his home country of Ukraine.

Usyk pulled off a minor upset in defeating Joshua by a 12 round unanimous decision in front of a packed crowd of 70,000 at the Tottenham Hotspurs Stadium in London, England.

The event started out badly with the crowd loudly booing the Ukrainian national anthem while it was being sung. That probably didn’t make Usyk feel too much at home having to hear the boos.

Within the first 15 seconds of the first round, Usyk landed a sharp left hand to the head of Joshua, getting his attention right away. Two more big lefts from Usyk would follow showing that he meant business.

Joshua looked incapable of getting to for the next two rounds, and he struggled to land anything until the fourth. By that time, Joshua was trailing 3-0, and needing to let his hands go because he was being taken to school by Usyk.“You have to do your work. Throw your front hand, your jab because if you concentrate on knocking him out, you’re going to lose your rhythm, you’re going to lose your work that you’re doing. I would love to have the rematch in Kyiv,” said Oleksandr Usyk at the post-fight press conference last Saturday night.

It’s more likely that Usyk will need to return to the UK and fight Joshua in London, England once again. It’s almost a given that’s where the second fight will take place.

Wembley Stadium is an obvious destination for the second Joshua-Usyk fight because there will be more interest from British boxing fans in seeing the two fight again after what happened last Saturday night.
People are going to want to see if Joshua can avenge his loss against Usyk, and some will be eager to watch AJ get beaten again. Joshua cannot afford to lose the second fight with Usyk, as that would throw a wrench into his dreams of becoming the undisputed champion at heavyweight.

The real tragedy is that Joshua just signed a contract extension with Matchroom Boxing that will take him to the end of his career. Losing the first fight after signing the contract is a bad omen.

“In the 12th round, they said to put some speed on, and I did, and the new,” said Usyk. “At this point, it was the biggest fight of my career but it wasn’t the hardest one.

“I tried to put my speed in it, and I punched him a couple of times, and then I was losing my rhythm. I was coming back to my corner and my trainer was saying, ‘You’re trying to knock him down,” said Usyk.

Oleksandr looked like a different fighter in the 12th round when he unloaded on Joshua in the final 30 seconds of the round. Joshua wasn’t ready for the sudden surge of offense, and he was knocked back on his heels.

The last seconds of the round saw Joshua looking badly shaken, leaning against the ropes and taking a shellacking from Usyk.

“He’s a true warrior, he’s a fighter, and he will improve his skills, and I can’t say whether he will or he will not, but I think he probably will,” said Usyk when asked if Joshua will take the rematch with him.

“As long as we have the rematch clause in our contract, so Anthony Joshua is our next opponent,” said Usyk.