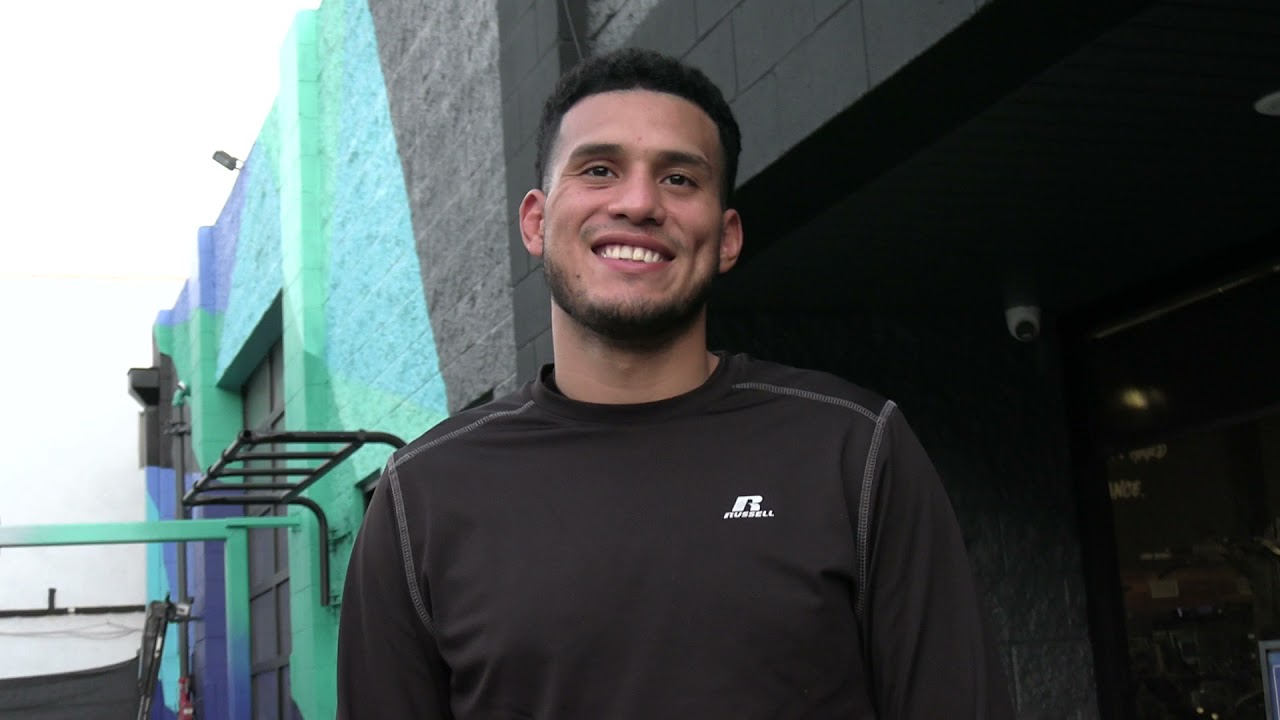 David Benavidez says IBF super middleweight champion Caleb Plant is lucky that he’s fighting Canelo Alvarez because if it were him, he’d put him in the hospital.

Assuming Plant defeats Canelo on November 6th, we could see Benavidez take on Caleb as his mandatory in early 2022. It’s likely that if Plant beats Canelo, he’ll vacate the IBF title to avoid having to fight Benavidez.

“Just the type of person he is. I’m not the only one that thinks this,” said David Benavidez to ESNEWS on him wanting to KO Caleb Plant.

“He thinks he’s the s***, and he thinks he’s a killer when he’s really not. He’s lucky Canelo is getting to him before me because I’d put his a** in the hospital.

“It was more with my brother but it was the same s***,” said Benavidez about a run-in they had with Caleb Plant.

“He tried to sucker punch, and his trainer got beat up. But now Caleb Plant got beat up. That’s what he gets for trying to be a tough guy.

“I always said that the guys that aren’t really tough in the ring do their most to try and act tough outside the ring.

“If you really want to act hard, go in and knock people out, but he can’t,” said Benavidez about Plant. “21 fights with 12 knockouts.

“He has to act out in ways like that. I think trying to slap Canelo was a bit of a b*** move, but Canelo came back and countered it,” Benavidez said.

Plant has an ego, that’s for sure, but all top fighters think highly of themselves. If Plant had poor self-esteem, he wouldn’t be where he is now.

If Plant beats Canelo and Benavidez defeat Jose Uzcategui on November 13th, we could see an interesting fight in 2022.

Canelo will first want a rematch with Plant to try and avenge the loss, and who knows how long that fight will take before it’s scheduled.
“It was pretty funny to watch,” said Benavidez about the brawl between Canelo and Plant last Tuesday at their press conference.

“It just made him look stupid,” said Benavidez about Plant slapping Canelo.

“He thought he was going to get in the slap and he got countered by two shots and he got cut. Hopefully, it doesn’t get postponed.

“I think Canelo needs to go to the body and cut the ring off a lot,” said Benavidez on the keys to victory for Canelo over Plant. “He’s going to be doing a lot of chasing.

“I think Caleb Plant is going to be running around, trying to box and trying to move as much as he can.

“But he’s going to get a little bit tired towards the seventh or eighth, and I feel like that’s when Canelo is going to put the pressure on and do what he does.

“I don’t know. I could be wrong. Maybe it’s the best Caleb Plant we’ve seen. That’s why these fights are fought, especially when it’s a unification fight like this.

“It’s probably one of the best fights of the year. Who am I to say what’s going to happen, but I feel like Canelo is going to win,” said Benavidez.

Attacking Plant’s body is a good idea for Canelo but it could prove to be difficult.

Plant isn’t going to stand in one place, and let Canelo attack him with body shots the way Callum Smith, Rocky Fielding, Avni Yildirim, and Billy Joe Saunders all did.

Canelo is going to have to chase Plant around the ring, trap, and try and get his shots off to the body without eating a left hook. Given how fast and powerful Plant’s left hook is, Canelo will pay a price if he attempts to attack his body.

Brawl Will Help Sell Canelo – Plant Fight
“I don’t think he intended to get cut like that and hit like that, but that bumped it up another million pay-per-view buys,” said Benavidez about the Canelo and Plant’s brawl at their press conference.

“Stuff like that makes boxing really entertaining. That’s a fight that everybody has been asking for and are excited for it, and I’m excited for it,” said Benavidez when told that Canelo said ‘Why not?’ upon being asked if he would be interested in fighting him next.

“Once I do what I got to do and I take care of this fight. It’s going to be an IBF title eliminator, so I’m next in line [to face the Canelo vs. Plant winner] once I get the victory [over Uzcategui],” said Benavidez.

“Uzcategui, I’m going for the knockout, that’s it,” said Benavidez on his message to his next opponent. “All my fans, November 13th in Phoenix, Arizona, it’s going to be one of the best fights of the year.

“Hopefully, the fight of the year. So I’m going in there and I’m going to get the knockout and get the job done.

“I’m excited. I’ve had some great sparring already, and I’m excited at finishing the camp strong and giving the fans a great fight.

“We know Uzcategui is a warrior and will bring a great fight, so I’m excited for that too.

Unfortunately, the brawl between Canelo and Plant came too early to guarantee a high number of PPV buys for their fight.

If this had happened the week of the fight, you could say for a certainty that it’ll help sell the contest on pay-per-view.

Right now, there are still two months to go before the Canelo – Plant fight, and the fans will forget by November 6th what took place last Tuesday, September 22nd in Los Angeles.

The brawl could help bring in more PPV buys for the Canelo vs. Plant fight on November 6th, as long as the two continue their trash talking.

All the stuff that Plant said about Canelo won’t have as much of an impact on him and the boxing public if Caleb continues to use them. He’s got to come up with new insults of Canelo if he wants to attract more interest in their fight.

If Plant lets up on Canelo in the following press conferences for fear of being attacked again, the boxing public will forget about the brawl and it won’t help bring in PPV buys.

“I never like these kinds of things,” said Canelo Alvarez to ESNEWS on his fight with Plant on stage. “We say to each other bad things, but who cares?

But he passed the line. He say something about my mother. That’s not good, and that’s why I pushed him and he came back with a left hook. He talks a lot, but in the ring, it’s different. Nobody can talk. Very special,” said Canelo.

The explanation by Canelo about why he attacked Plant at the press conference would be believable if not for the Mexican star using the same insult towards Demetrius Andrade four months ago last May.

It would have been better for Canelo to just tell the fans that he didn’t like Andrade calling him a “drug cheat” because that’s believable.