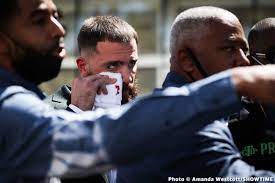 Caleb Plant suffered a cut on his right cheek after Canelo Alvarez slugged him with a bare fist during Tuesday’s press conference in Los Angeles for their fight on November 6th.
Canelo says he didn’t like Plant calling him a “mother f****” during their face-off, so he shoved him really hard. Moments later, Canelo punched him with a right hand to the head.

PLANT TALKS ABOUT HIS CUT
“It’s just a small cut. It’s from my sunglasses. I had sunglasses on. So when whatever happened, happened, it just scratched my cheek.”

There’s no word yet whether their November 6th fight will need to be postponed because of Plant’s cut. It would be unfortunate, but this is what happens when you get someone reacting to mere words.

Canelo was taking the term ‘mother-f***’ literally, perhaps not knowing in the U.S, it’s used all the time by trash-talkers. Given that Canelo is from Mexico and not the U.S, it was lost in the translation with him not understanding that Plant was saying what he thought he was.

If Canelo is going to act out physically by swinging or shoving Plant in future press conferences when he calls him names, they’re going to have to have a barrier between them.

With the cut that Plant suffered, it’s vital that Canelo not be allowed to get too close to him in case he calls him another name that he takes literally, not understanding the customs.

CANELO EXPLAINS WHY HE SHOVED/PUNCHED PLANT
“He was talking about my mom. He said, ‘You motherf***er.’ You passed a line right there. That’s why I pushed him. He came back with a left hook. That’s what happened,” said Canelo.

Again, Canelo doesn’t appear to understand the use of the expletive that Plant hurled at him. Canelo can’t take things like that literally; otherwise, he’ll wind up physically attacking Plant in the future whenever he calls him a name.

Hopefully, Plant’s cut will heal by the time their fight takes place on November 6th. The cut will likely get in the way of Plant’s ability to spar now and could impact his training time.

After today’s incident, they need to keep Canelo far apart from Plant if he feels getting physical with him. If he wants to throw punches, they need to put them in different locations, so the fight doesn’t get postponed due to injuries.