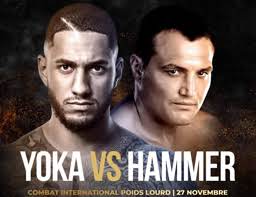 Tony Yoka, the dynamic heavyweight punching Parisian, aims to impress in his ESPN platform debut. Yoka, who won a super heavyweight gold medal for France at the 2016 Rio Olympics, will fight veteran Christian Hammer in a 10-rounder Friday at H Arena in Nantes, France.

Yoka-Hammer will stream live and exclusively this Friday, Nov. 27 in the United States on ESPN+ beginning at 2:55 p.m. ET/11:55 a.m. PT. The ESPN+ stream will also include the return of unbeaten 2016 French Olympic gold medalist Estelle Yoka-Mossely against Pasa Malagic in an eight-round lightweight bout. Yoka and Yoka-Mossely, who have been married since 2018, welcomed their second child in May.

Earlier this year, Yoka inked a promotional agreement with Top Rank, which will co-promote him with Ringstar France.

“Tony Yoka’s potential is limitless, and he is a grounded young man who is motivated to be a great professional fighter,” said Top Rank chairman Bob Arum. “France has never had a world heavyweight champion, and I believe Tony is the one to bring the sport’s biggest honor home.”

The 28-year-old Yoka’s stellar amateur run included a berth at the 2012 London Olympics and gold medals at the 2015 World Championships and 2010 Youth Olympic Games. Before his triumph in Rio, he’d already defeated the likes of former heavyweight world champion Joseph Parker and current undefeated prospects Joe Joyce and Ivan Dychko. At the Rio Olympics, he defeated Croatian standout Filip Hrgović in the semifinals and edged Joyce in the gold medal match.

As a professional, Yoka (8-0, 7 KOs) made his debut in June 2017 with a second-round stoppage over the previously undefeated Travis Clark. Apart from a decision win over Jonathan Rice in his second outing, Yoka has stopped every foe, including durable Englishman David “White Rhino” Allen and former European champion Alexander Dimitrenko. He made his 2020 debut Sept. 25 and stopped former world title challenger Johann Duhaupas in one round.

Hammer (25-6, 15 KOs) has fought many of the leading heavyweight names during his 12-year career, falling short against Tyson Fury, Luis Ortiz and Alexander Povetkin. He’s notched myriad upset victories, including a highlight-reel knockout over David Price and a 2016 split decision over Erkan Teper for the WBO European belt. In March 2019, he went the 10-round distance against Ortiz and has not been stopped since Fury forced him to retire on his stool after eight rounds in their February 2015 clash.

About ESPN+
ESPN+ is the industry-leading sports streaming service that offers fans in the U.S. thousands of live sports events, original programming not available on ESPN’s linear TV or digital networks and exclusive editorial content from dozens of ESPN writers and reporters. Launched in April 2018, ESPN+ has grown to more than 10.3 million subscribers.

Fans subscribe to ESPN+ for just $5.99 a month (or $49.99 per year) at ESPN.com, ESPNplus.com or on the ESPN App (mobile and connected devices). It is also available as part of The Disney Bundle offer that gives subscribers access to Disney+, ESPN+ and Hulu (ad-supported) — all for just $12.99/month.