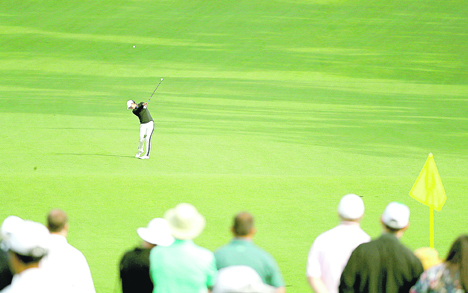 Saso fired the solid closing round but it was not enough to catch up to winner Jennifer Kupcho, the NCAA champion from Wake Forest.

Saso fired two birdies against a bogey on the front nine and hit four birdies while making two bogeys going back to finish with a 69. Kupcho finished with a closing round of 67.

Saso fired opening rounds of 72-73 to advance to the final round at the home of The Masters. She ended up tied with Yuka Yasuda of Japan, who had a final-round 72.

Kupcho was the only other player to break 70 in the finale at Augusta National, firing a 67 to add to rounds of 68-71 for a 206 total and a four-stroke victory over Maria Fassi of Mexico, who closed with a third-straight 70.

In a dramatic battle between two 21-year-old US collegiate stars, Kupcho had three birdies and an eagle in the last six holes in firing a five-under par 67 to finish 54 holes on 10-under 206 for a four-stroke victory over Fassi, who fired her third consecutive 70.

“It’s just amazing. It’s just great to be able to do that,” Kupcho said. “It’s a feeling I can’t describe.”

The amateur tournament was the first women’s trophy ever contested at Augusta National, which opened in 1933 but didn’t admit its first female members until 2012.

A field of 72 played the first 36 holes at nearby Champions Retreat before the top 30 advanced to the last 18 holes at the famed Masters layout.

Women’s world amateur number one Kupcho, the reigning US college champion, and Fassi, last year’s US women’s college golfer of the year, staged a dramatic duel in a historic moment.

“It’s just exciting to be a part of history,” Lopez said.

“It’s a dream come true. I’m so happy for them,” Sorenstam said. “This has huge potential to not just inspire young girls but golfers, other women in sports and women in business.”